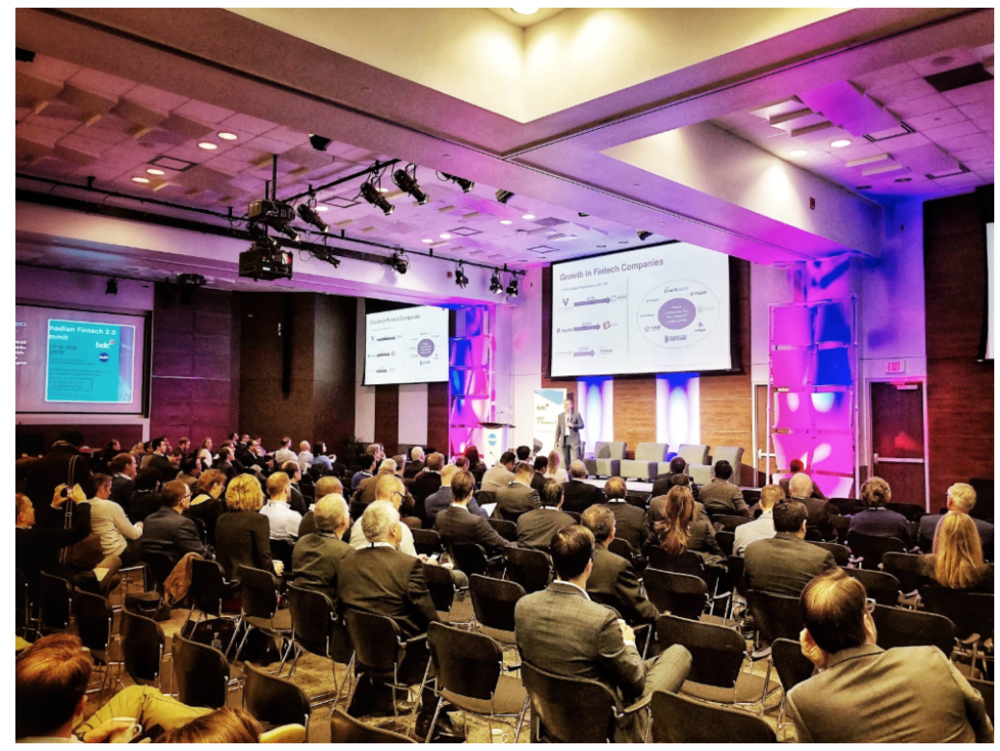 He stated that Canada and the US are very much alike when it comes to startups they produce, so the scalability problem that everyone keeps talking about isn’t really a problem. The real problem lies in the miniscule number of startups that Canada creates, including those in Fintech.

This is not to say that things haven’t gained momentum over the past few years. Montreal, Toronto and Vancouver are ranked among the top fintech hubs in the world. But on on a more granular level, of the 100 leading fintechs in the world, only 6 are Canadian.

There are certain features particular to Canada that have kept it’s fintech ecosystem behind the eight ball. It is among the few countries in the world that went unscathed during the 2008 Financial Crisis, primarily because of extremely stringent banking regulations.

Consumers, therefore, have been quite satisfied with the the country’s banking system. In other words, they didn’t really want things to change. According to a report by EY, Fintech adoption rate in Canada is close to 18%, almost 1/5th of the adoption rate in China and half of that in most developed nations.

But the new “pokemon generation” expects a lot more. Growing up with smart gadgets that put consumer experience at the center of everything, they expect their banking experience to be as simple as buying a song on their phone.

On top of that, a bigger threat is looming on the horizon. Tech giants such as Amazon, Apple and Google have been playing around in the finance space for sometime now. At the end of the day, they have more data on payments and transactions than many Canadian Financial Institutions, which gives them a strong advantage over the incumbents.

Moreover, these tech giants won’t be entering the Canadian market 3, 5 or 10 years down the line, some of them are already here. Alipay set up shop in Canada a couple of months ago and is looking to provide savings and lendings services in Canada within the next 2 years. As any economics enthusiast would agree, these activities are the first step towards creating a legitimate full-fledged financial institution.

All this is to say that the time when we think about Montreal vs Toronto or Toronto vs Vancouver  is over. What really matters is Canada vs Rest of the world. Banks and startups across Canada need to collaborate and innovate.

Indeed, many banks are stepping up. Approximately 82% of financial institutions are looking to collaborate with Fintech startups over the coming years.

They walked the talk at the BDC Fintech Summit by participating in the Reverse Pitch Battle. In a nutshell, the reverse pitch battle was a chance for top executives from banks such as TD Group, National Bank, Bank of Montreal and Silicon-valley Bank to go on stage and convince fintechs on why their bank is the best to work with.

Those who have been involved with Fintech over the past 7-8 years would unequivocally agree that this was a mammoth step in the right direction because not long ago, it was impossible for a fintech to get that proverbial foot in the door. A highly detrimental position as without that first customer, startups struggle to keep a positive cash position.

Each of these banks hit the right notes with the pitches. Most of the points resonated with us at FormFintech, as we work with numerous startups and are more than acquainted with ‘bottlenecks’ such as long sales cycle and dealing with multiple departments, when a fintech deals with financial institutions. Quick summaries of value propositions pitched by each of the FIs are presented below.

Bank of Montreal: A track record of working with partners such as DMZ, FormHero, Creative Destruction Labs etc. They follow a digital-first approach and put customer experience at the centre of all innovations. Additionally, they have a dedicated ‘enterprise team’ that would help Fintechs navigate through complicated and cumbersome processes within the bank.

TD Bank: Access to top patent law firms and option to have all patent filing expenses paid in full. With this approach it was clear that TD is aiming at innovations high up the food-chain i.e. at the research level. Already existing partnerships include Flybits, Moven, Kasisto, Layer 6 AI.

National Bank: Work with the coolest and latest technologies and have a short sales cycle – music to the ears of any fintech startup. National Bank aims to further simplify things for fintechs by establishing only one point of contact at the bank. They have made fintechs a priority,  evident from their recent partnership with FormFintech, IVADO (The Institute for Data Valorisation) and Lending Club (P2P and alternate investing platform).

Silicon Valley Bank: Established with the goal of working with founders and startups, they have deep sector expertise and extensive knowledge of funding rounds, along with a huge network of tech companies and VCs. SVB won the competition, through voting done by the audience at the summit.

The Pitch Battle in Numbers (and Peculiarities)

The big showdown, the reason behind the presence of almost everyone at the summit – The Pitch Battle. Each of the 48 startups, mostly from Canada, competed for a total of $100,000 in prize money and the chance to gain more exposure.

For us at FormFintech, the sheer number of fintechs present at the event served as a good proxy to understand what is happening in the entire Canadian Fintech Ecosystem.

Below, we have classified startups using strict financial technology definitions. Despite the buzz surrounding cryptocurrencies, only two startups (4.17% of total) made it to the competition, which could serve as an indicator to the fact that blockchain as a technology is still in the early stages.

Banking Operations and Deposits and Lending are tied at first position with 16.67%. As we alluded to at the beginning of the article, the emergence of startups in the lending space suggests that the industry is maturing and these Canadian ‘tech’ establishments are slowly but surely moving towards becoming legitimate full-fledged financial entities.

An important development the above classification did not capture is the emergence of real-estate focused fintech startups. In total, 6 of the 48 (12% ) startups were real-estate focused, pointing towards the fact that the term “fintech” can be all encapsulating. With time, we expect to see many other ancillary industries (such as Environmental, Social and Governance) falling into the realm of financial technology.

We analyzed the distribution of startups based on location of their head office. Comes as no surprise that the bulk of startups (58%) were from Ontario. But Quebec had a noticeable presence at the event (22%), which was heavily attributable to the delegation +10 fintechs put together by Desjardins Labs, Holt Accelerator, Finance Montreal, and us (FormFintech). With the rapid changes that are taking place in the province of Quebec, we expect the number to be much higher in the coming years.

Surprisingly, there were no startups from Vancouver, even though its ecosystem makes up approximately  20% of the total fintech startups in Canada.

There was a strong presence of B2B startups at the pitch battle, which again points to the fact that there is trend towards collaboration among startups and financial institutions. Many of these startups will allow FI’s to better serve already existing markets or tap into underserved markets.

After the first cut, only 11 startups made it through. The final winners were Lendified and Cinchy.

While many saw this as a pitch competition, ecosystem builders and promoters across Canadian cities saw this event as an opportunity to build bridges.

A strong contingent from Montreal comprising different stakeholders, with one unifying goal of pushing Canada on the top of ladder as a leader in fintech, made its presence felt at the fintech summit. Below are each of the stakeholders and a quick synopsis of their activities and contributions.

Desjardins Lab: As always, brought the ‘fun’ vibe by setting up a mini sugar shack, that included maple flavoured popcorn. On a more serious note, Desjardins aimed to present the features of their upcoming Coopérathon, and recently launched an entrepreneur-in-residence program for Fintech startups. The Lab served as part-sponsor to the event, without them this contingent would have not been possible.

Holt accelerator: Newest addition to Montreal’s Fintech Ecosystem. Closely related to FormFintech, with Jan Arp as one of the Managing Partners, along with Brendan Holt, CEO at Holdun and Managing Partner at Holt Accelerator. The Holt family have a long history of investing in and working with financial institutions, and want to use the Holt Accelerator as a way to give bank to the community.

Finance Montreal: A prominent part of the Montreal Fintech Ecosystem, with their mega-event in the form of the Fintech Forum. They served as part financial sponsors for the delegation, and are currently in the process of building a fintech station in Montreal.

FormFintech: With the aim of working with Fintechs at the grassroots level, FormFintech was championing the assembly of Fintech to partake in delegation at the BDC Fintech Summit. We are proud to say that three of the startups that pitched at the summit were coached at FormFintech’s Ascension Program; however did not make the final stage, only due to how early in nature these startups were.

A threat on the horizon in the form of tech giants, maturing Fintech industry, banks opening up to innovation and collaboration among burgeoning Fintech hubs were the major highlights of the summit.

As a whole, these initiatives were aimed towards building a stronger Canadian Economy. The country has been blessed with many natural resources, and the most sustainable of these resources is technology, or what Peter called “freeze dried human intelligence.”

FormFintech is optimistic about the numerous changes that technology will bring to the world of finance. Over the past few years alone we have seen a trend towards repackaging the way a product is delivered to the consumer, rather than just automating and industrializing a few steps.

This is what we need, fintechs will continue to generate value on an ongoing basis, and banks need to follow suit in order to appeal to the consumer of the future!