Can Blockchain Help Save the Planet? Part 1 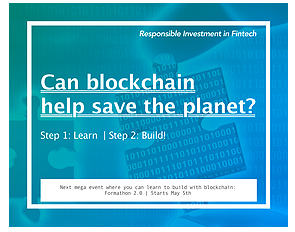 The Use of Blockchain with Carbon Trading

There is a dire need for things to change. Many in the enlightened climate change camp are screaming at the top of their lungs to make the general public, government and corporations realizehow perilously close to the edge we are.

Canada, in particular, is lagging behind the curve. Based on a recent report published by the OECD, we are far from the best-in-class countries by a considerable margin. For instance, we are the second-most carbon and energy-intensive economy within the OECD group of countries.

At first thought, one may think that high carbon emissions are the result of a resource-heavy economy, coupled with weather that naturally causes the use of mammoth amounts of energy. But the OECD states that Canada’s use of energy and resource is high even when compared to other resource-heavy economies.

Some are working towards making significant improvements. Billionaire tech founders such as Bill Gates, Jack Ma, Jeff Bezos and 16 others combined forces at the end of 2016 to create the Breakthrough Energy Ventures (BEV) fund, a $1 billion fund which focuses on startups that will be able to deliver clean and affordable energy.

But the pace of damage far outweighs progress made by these select individuals, and others like them. What’s needed is a solution on a larger scale, a decentralized one that gives power to the masses, especially in the realm of carbon trading.

In today’s world, the word “decentralized” would immediately cause one to think of blockchain. But this technology is currently going through a “hype” stage. Thus, it would be wise to further explore whether it can be part of the solution when decentralizing carbon trading markets.

Evolution of Blockchain in Carbon Trading

The concept of Cap-and-trade has many opponents, “…a fake market that has been plagued with untold number of frauds and mishaps…”, they say. Nonetheless, emissions trading formed an important component in the landmark Paris Agreement, confirming the growing need for emission reductions through a system that is transparent and encourages accountability. And for an efficient trading market to exist, a complex yet essential system of checks, accreditations, and verifications is a necessary requirement.

Blockchain has been purported as a solution for cap-and-trade since 2014. Joe D’Angelo came up with a concept of People’s Cap-and-Trade platform (Sno-Caps), with regulation by reputation (RBR) as its core tenant. Companies such as Uber, AirBnB. Amazon and other platforms are an excellent example of RBR in function.

Users rate each other’s actions, allowing for a scalable solution which is also inexpensive. In a nutshell, every person in the world would be entitled to an equal portion of carbon emissions each year, where the size of the portion will be determined by the global emissions cap.

In order to understand the economics of this system, one needs to comprehend that there is a difference between determinants of the number of units that each individual will own and price of each unit.  Number of units will be a function of total number of capped units and number of users in the system. A simple division exercise will determine units owned by a person.

Demand will come from companies who want to purchase these units as their “right” to pollute. Given that supply is constant, the price will increase as the number of companies increase, but the number of units owned by each individual will start to go down. At the start one individual will own many units, but the price will also be lower as it will be determined by the mechanics of demand and supply.

People would log into a blockchain-based trading system, where they would be able to lease out their carbon shares to emitters in return for money. The end-goal of this system is to give power to the people. Furthermore, there is no risk of just one player buying up the entire market, as individuals are leasing rather than selling their credits. If an emitter misbehaves, the lease can be canceled.

The following year, BitTrade was introduced. A step below Sno-Caps in terms of decentralization, where private organizations independent of the government would run a cap-and-trade program over blockchain, ensuring complete transparency. Corporations would be required to publish their emissions numbers and miners will carry out proof of emissions calculations.

Companies would exchange shares between each other to meet emissions needs. The government only has to audit corporations and confirm that they are being honest with their reports. A cause for concern here, however, would be verifying actual emissions (a possible solution would be presented in the second part of this article series).

Does Blockchain Really Up the Ante?

Numerous fintech innovations can be considered superficial, especially in payments, where the backend remains as archaic as ever. Unless blockchain directly counters the underlying problems leading to reductions in costs and improvements in accuracy, it will be another smoke-and-mirrors solution.

The biggest impediment to carbon trading, thus far, has been lack of trust, which in turn leads to problems of double counting and inaccurate reporting.  Double counting can occur in many ways such as double issuance, double claiming, double use and double purpose. As an example, double claiming occurs when two countries are governed by different mitigation  pledges and units are transferred from one to the other. In this case, both countries can claim reduction, but on a global level reduction occurred only once.

Another challenge is the lack of a single source of data. Almost every sector suffers from the problem of fragmented and disconnected systems, which are usually supplemented with data in the form of spreadsheets riddled with human errors and incongruent structures. All this leads to the same truth being presented in different and conflicting ways.

A unified registry system could solve some of these major problems if it can perform the functions of registering, issuing, transferring and retiring offsets. Moreover, the registry mechanism should be capable enough to control the flow of information, so as to maintain some parameters of privacy.

Blockchain as the Facilitator

Blockchain with its ability to record transactions from the beginning to end grapples with the issues of double counting and registry right from the get-go. Furthermore, it doubles as a trading mechanism, removing the need for a clearing house. Not to say that a clearing house would not work well on its own, but pushing it out of the equation might translate into lower transaction costs and faster clearing. Many exchanges across the world are experimenting with blockchain. Nasdaq Linq, a platform for private market trading is one example.

The Proof is in the Pudding

Based on the explanation above, a blockchain solution for carbon trading is compulsively likable. There are definitely some pioneers and forward thinkers in this arena, surprisingly at the state level. Two countries in particular, Russia and China, are vying to become shining examples of how a distributed ledger can be used to save the planet.

In China, Energy blockchain labs and IBM developed a blockchain-based green asset management platform based on hyperledger fabric. According to Cao Yin, Chief Strategy Officer of Energy-Blockchain labs “It is estimated that the platform will significantly shorten the carbon assets development cycle and reduce the cost of development by 20 to 30 percent, enabling cost-effective development of a large number of carbon assets.”

Meanwhile in Russia, Airalab and Microsoft Russia have created an Ethereum-based trading platform which allows private companies to purchase and sell carbon credits. The first test carbon credit transaction worth $120,000 was carried over the platform on December 1, 2016.

Also, countries and governments are not the only ones making forays into this arena. Private players such as Poseidon, a startup based out of Switzerland, created a carbon currency aimed at changing the way we value nature and give everyone access to the carbon market. They plan to change the way carbon credits are priced Furthermore, instead of building a trading system from scratch, Poseidon is leveraging the strengths of its strategic partners to develop a solution.

By using an open source ledger system that provides interoperability between financial institutions and different payment networks called Stellar (developed by a non-profit called Stellar.org), Poseidon skipped the process of developing its own blockchain network. A technology consultancy specializing in big data & analytics, cyber security and digital transformation, 6point6, will develop smart contracts and tokens that will be traded on Stellar. When it comes to data analytics, aimed towards driving consumer demand and building carbon positive products,  other partners will step into the picture.

These solutions look promising, but don’t tackle an important underlying problem. More to be discussed in Part 2 of this series. Stay tuned!

Interested in building your own fintech and/or taking part in creating innovative solutions to today’s financial challenges?

Join us this May in our second edition of the Formathon – Starts May 5th!