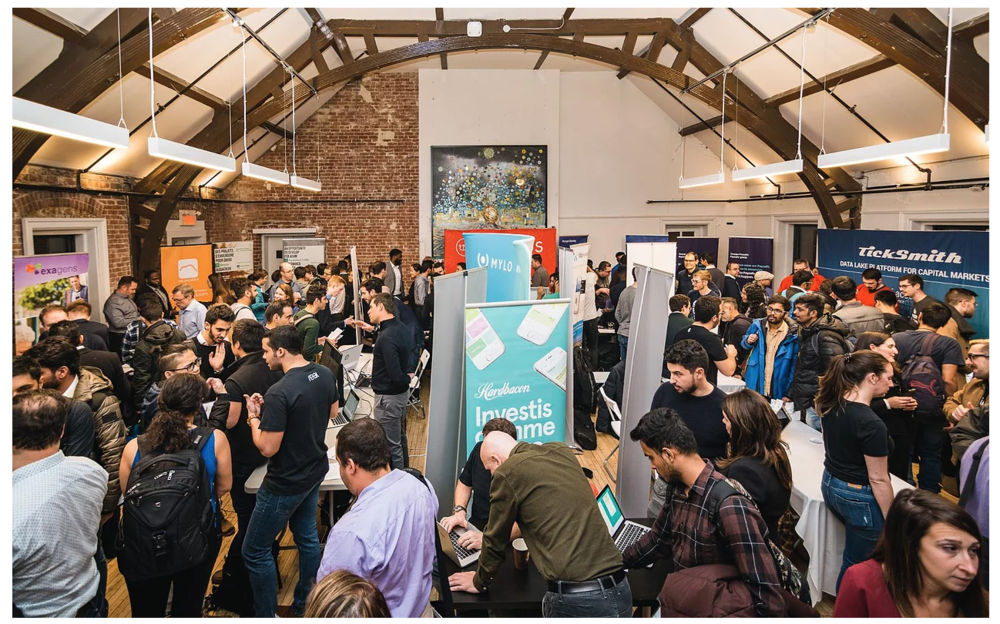 If you were at the Notman House during the evening of the 27th of November, it would have been hard to miss the buzz that was created by Fintech Cadence’s Career Fair. The energy so was contagious that some startup enthusiasts and students sipping coffee downstairs whipped out their phones and decided to sign up for the event right then and there!

Fintech Cadence took a 10X approach towards the concept of a career fair ie. it was not just about a hall where corporations/startups shake hands and exchange email addresses, but also about educating the audience and providing opportunities for on-the-spot hiring.

To that end, Cafe Osmo (ground floor of Notman House) was converted into an area conducive for in-depth and intimate discussions between employers and job seekers. Specifically, the concept of roundtable discussions was incorporated into the event, with each table representing a theme such as startup-life, future of blockchain, use of artificial intelligence in finance, banking jobs of the future, etc. Some rooms were also designated for on-the-spot interviews – in the event a fintech saw a high-quality candidate and didn’t want to waste any time hiring them.

In a matter of hours, close to 300 attendees developed connections with more than 28 fintech startups and corporations combined. But the most impressive part about the event was the diversity of attendees.

Diversity in Background and Gender

Ever since its inception, Fintech Cadence has been a strong advocate of gender equality in finance and technology, plus the amalgamation of the two ie. fintech. But event after event, we found the gender ratio to be stuck at 20%. The Career Fair, however, saw a much higher percentage – more than 30% female participants –  pointing towards the fact that efforts to improve female participation are moving towards fruition.

But that wasn’t the only demonstration of diversity at the event. There was a comparatively impressive mix of participants in terms of skills. In the words of one of the startup: “Loved the diversity of individuals. There were so many women present and individuals of diverse cultural backgrounds. The candidates were also a mix of computer science, product, UX, marketing, etc.”

To be more precise, there were an equal number of young professionals and graduates at the event. The biggest group comprised undergrad students, which is understandable because they are among the most intrigued by and acquainted with fintech, primarily due to the recent frenzy created by bitcoin.

On the other side of the table, attendees were very happy with the balanced group of companies and startups present. According to one: “The Fintech Career Fair was an excellent mix of Montreal’s Fintech ecosystem from small startups to established companies. You really got a sense of how much excitement and opportunity lies within the field and the diversity of attendees and companies really cemented that. I got a few interview opportunities and I’m excited to see where my future lies in Fintech!”

The Career Fair saw a total of 7 corporations, 4 SMEs and 17 startups. The graph below presents a more granular breakup.

Indicators of Consolidation and Maturation?

What could be the reason behind these changes?

One take is that the fintech industry in shifting towards a stage of consolidation, along with mainstream acceptance and interest among individuals other than and beyond early-adopters.

Our recent mapping and analysis of the Canadian FIntech Ecosystem points towards the same. Through this analysis, we noticed that the number of fintechs created per year has decreased for Canada as a whole, after reaching a peak in 2015.

Some VCs, however, think that this decrease is not really a decrease. It’s just that most fintech startups are operating in stealth mode, and once they are out in the open we will have a better sense of number of fintechs created.

Which is why we believe that it is too early to chart out the precise reason behind this decline, especially because Canada was late to jump on the fintech bandwagon. Even if there is a slow down, most fintech enthusiasts should not be concerned because the advent of open banking could initiate a Fintech 2.0 revolution.

Montreal’s Startup Community: Support Each Other to Grow!

Ask any startup veteran about the peculiarities of the Montreal Startups Ecosystem, and the first thing that will pop-up in their mind is the community; one that supports and helps its members in every way possible.

The Career Fair was no different, with community members including the Holt Fintech Accelerator, MTL NewTech, Desjardins Lab and District 3 Innovations Center (Concordia) present to make things happen. On top of that, startups such as Lendr, Good4Change and Carboscope  – results of the Desjardins’ Cooperathon – also brought their new found fintech enthusiasm and spirit.

Here’s what Alejandro Martinez Ramos from MTL NewTech had to say about the event. “I spoke with a few startups at the fair, and it was incredible to see how pumped up they were due to the overwhelming number of attendees that FormFintech was able to attract to the event. This is a very precious and important value-add for startups who lack the resources and time it takes to gain such a massive audience. Now, I am curious to learn about the successful hiring stories through this event!”

For Fintech, Canada and Jobs

As mentioned before, it could be that Canadian fintech is entering the next stage of the industry life cycle, but changes such as open banking could provide another push that will more than likely alter the face of the financial services industry as we know it.

The Fintech Industry already accounts for approximately 30,000 jobs created in Canada, with Ontario as the biggest employer at roughly 13,000, followed by Quebec at 10,000 and British Columbia at 5,000. But given that the financial services industry employs a total of 1,171,300 individuals in Canada, we believe that the number of jobs in fintech still has tremendous room for growth.

With the success of the second Career Fair, there’s no doubt in our minds that the 3rd edition will be even bigger and better! In the meantime, we and and our community partners will continue to work feverishly towards building a stronger fintech ecosystem in Montreal.

To that end, we will be focused on two programs starting late January this year: The Ascension Accelerator program for early-stage startups and the first version of the Building Blocks Fintech Certificate that aims to impart in-depth knowledge on all facets related to the fintech industry.