The journey into the gender gap (5 min read) 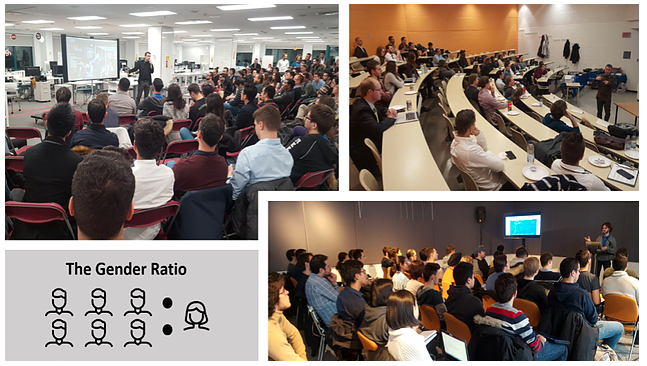 FormFintech is a not-for-profit organization that is endeavouring to build a movement of people who want a better financial society for Canada. Our humble beginnings commenced at a grassroots level with various sessions targeting Montreal’s Universities. After conducting five “Introduction to Fintech” conferences, across differing universities, engaging with +200 people to raise awareness of the inherent opportunities in finance, it became clear from the 35 women in attendance (17.5%) that we needed to better understand the gender gap. After all, how may we build a better society for Canada if half our population is under represented?

Time for some action

We assembled a team of young, ambitious women leaders in Montreal to investigate this issue. Our goal was to explore how our society may reach its full potential in the workforce. Through our discussions, four core areas were identified that are contributing to career development gap, and included an emphasis on learning, networking, micro-biases (i.e. confidence gap imposter syndrome, and unconscious bias), and macro-biases (i.e. cultural/societal pressures or group think). We decided to conduct some internal research, which consisted of organizing several intimate focus groups at the differing Universities. In total 35 people participated in the focus groups. This time, women were the majority representing two-thirds of our audience.

Although the problem is easy to summarize into two words; gender gap, it’s nonetheless quite a complex subject matter to dig into. Most are shocked to hear that only 5% of all Fortune 500 CEO role were occupied by women. Additionally, students (including female students) seem to be unfamiliar with the gender gap challenges that they will face when they enter the workforce. This is in comparison to the young professionals who have experienced the challenges first hand. If awareness of gender gap issues for women occurs only once they experience them, then both women and men are ill-prepared to overcome those challenges. By diving deeper into the rabbit hole, it became clear that one of our biggest challenges is awareness, especially for women entering the workforce, but also for working male professionals.

We opened the discussion with a question, “if you were offered a position junior to your current skill-set, would you take the job?” to understand the emphasis on job-based learning. While results were mixed, we started to see patterns in how men and women apply for jobs. For instance, one male student described his job hunting process in the following way “first requirement: honours, well I’m never going to have that so I’ll skip to the second requirement, a certain GPA score, well mine’s close enough!”. In comparison, women tended to apply for positions for which they were confident they held all the qualifications.  This aligns with what the research suggest; men apply for jobs if they are 60% qualified, whereas women tend to apply only if they meet almost all criteria.

The conversation shifted quickly to the importance of building a professional brand through networking, and ultimately seeking sponsors. Our goal was to understand what the research suggests; women aren’t finding the right sponsors. We know this to be partly attributable to the fact that (1) Women are not spending enough time networking, (2) People hire who they like, thus in male dominated industries men tend to hire more men, (3) women have issues “using” people for professional gain. While networking was well understood to be very important, both women and men didn’t seem to have a good grasp on how to effectively network  (i.e. a surface level preaching of networking importance versus sound playbook for effective networking). For instance, many understood that you should find a job first then connect with those associated to the position; however, few believed in connecting with people first in order to find a job. Additionally, it was clear from our groups that men tended to be more goals-oriented in their networking versus women that tended to be more relationship building focused.

We thereafter explored areas that are a bit more challenging to control, such as the confidence gap, imposter syndrome, and unconscious biases. The research suggests that women are more likely to lack confidence, feel like an imposter and be negatively affected by unconscious biases. The lack of confidence for women came out early and often in the discussions. For instance, as we discussed networking, women found they lacked the courage to simply strike up a conversation with a stranger. With respect to unconscious biases, we spoke about the research that suggests society tends to unconsciously praise males and condemn women if they were to act in the exact same way. For the most part, the focus groups were unfamiliar with this issue, and thus ties back to the importance of awareness.

We concluded our discussions with how cultural & societal pressures or groupthinkcontribute to the gender gap. Deloitte found an 80% improvement in business performance when companies had high levels of diversity and inclusion. Again, many of our focus group participants were not aware of the inherent exclusion of minorities (not just women), except for those that are facing this issue. Additionally, many had a hard time identifying when groupthink was occurring, especially true for males that may unintentionally fall into groupthink habits.

Next stop, the Montreal-wide “Investing in Women” event

About a third of the focus groups participants joined the next phase of the movement during a Montreal wide event held at Desjardins labs, “Investing in Women”. Our head of operations, Layial El-Hadi kicked-off the event by presenting our findings. This was followed by a keynote speech by Eytan Bensoussan, who presented McKinsey’s findings proving that investing in women is better for profits. He was also quick to point out that we shouldn’t only do it because it’s good for business, but because it’s the right thing to do! A proud moment showed that Canada was a leader in this regard, although we still have long way to go for gender parity.

Let’s hear what they experts say!

Following Eytan’s presentation, a panel expanded on a lot of points we found in our research. The core topics discussed included confidence, networking, maternity leave, and HR improvements.

Confidence was the first issue to be addressed.  TandemLaunch tracks all stages of their startups. They found that women and men have the same attrition; however, why they left is different. As for the men, 80% are terminated by TandemLaunch, whereas 70% women resign on their own.  In most cases, women simply took themselves out of the running thinking they weren’t good enough. One partial cause, our family, friends and fools (the three F’s) pressure women into taking the safer routes (i.e. stable salaries).  One suggestion, take a play out of a man’s playbook; men just do it and ask for forgiveness, whereas women tend to wait for permission.

With respect to climbing the corporate ladder, it was suggested that women take diverse strategies, which should include networking for mentorship, sponsorship and finding allies. The panelist (which included 4 women out of 5) agreed that many of their mentors over the years have been male. Beyond mentors, it was advised to constantly look at who you surround yourself with, and make conscious decisions to push away from partnerships due to contradictory values. On a similar note, women helping other women tends not to be their best “skill-set”, such that women sometimes still like to be the only women in the room. A cultural change is underway, with increased women becoming more supportive of each other, yet women still need to ask themselves, “am I really helping?”.

The elephant in the room, maternity leave, was addressed head on. Mothers can feel resentful towards their children for taking a year off, especially when it derails their career. Taking a year off is a long time, so it was suggested to strategically plan maternity leave as much as possible. At TandemLaunch, it was joked that they raise their rounds per the family schedule of their female CFO, Emilie Boutros. Even on maternity leave, Emilie still maintains daily conversations with her staff to remain up-to-speed. Lastly, it was mentioned that technology lends a hand here, such as the flexibility brought about through tele-conferencing.

Finally, the panel unanimously agreed that HR in its current state needs an overhaul. Some HR departments lack flexibility, as they judge employees by their clocked times rather than the value employees create. HR should be a c-level position, and not simply confined to administrative tasks. Talent is the most important thing in a firm, and requires someone who can truly champion talent. At FormFintech, we couldn’t agree more!