Blockchain – When will we chain to the block? 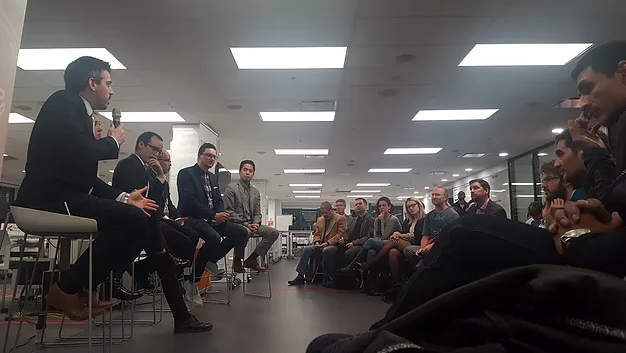 The name for what blockchain represents to financial institutions has shifted over the years from cryptocurrencies, to bitcoin, to blockchain, and now to distributed ledger technologies. As its name changed, this cypherpunk movement has significantly witnessed an increase in awareness as most major companies in certain sectors have published papers (e.g. research, software, accounting, banking, government, etc.).

It seems that these stakeholders have been driving blockchain awareness forward as they debate its potential; which include permissioned versus permissionless ledgers for financial institutions, or public versus private blockchains. This change in opinion has additionally resulted in academia witnessing the largest number of researchers in the field relative to the past, especially in cryptocurrency. Law firms are increasing their articles, publications and books on the topic to further cement themselves as the legal experts, while exploring the opportunities and threats it poses to their industry (i.e. smart contracts). Small and large accounting firms are growing the number of resources under management, by mandating internal or external staff to identify and work on projects that may have the potential to be operationally implemented in the near-term, namely in the domain of auditing. Furthermore, there’s been an explosion of companies providing blockchain solutions, such as IBM, Microsoft and R3.

Looking for a Solution? Problems Needed

Despite all of blockchains’ upward momentum, it is still viewed as a solution looking to find a problem, with continued uncertainty around its ability to scale. Bitcoin, the flagship blockchain application, has over 10 million bitcoin wallets, and performs close to 300 thousand transactions per day, triple that of two years earlier. Nonetheless, this pales in comparison to MasterCard’s estimated 4 billion daily transactions. What’s more challenging, the current structure of bitcoin can now only support a mere 7 transactions per second, while MasterCard can handle over 50,000 transactions per second. Knowing this limitation, blockchain needs to “fork” to address such scaling issues; a task in which experts can’t agree on the right method. Experts have since agreed for the sake of stability to leave its structure as is until a long-term solution can be devised. Segregated witness (segwit) is being marketed as a solution to address scale; however, at best it may double the current transactions per second.

Another famed solution, Ethereum, has successfully established itself as a software for experimenting with blockchain, although these experiments don’t seem to advance beyond the laboratory stage. It’s continual forking, in its efforts to scale, and the lack of an agreed direction among its community members has rendered its platform too unstable for serious initiatives today.

From Incubation to the Supply (block) Chain

Consequently, the future implementation of blockchain may first occur outside of the financial sphere, such as in the supply chain management domain. An example of this can be seen in Everledger, which uses blockchain technology to store the digital thumbprint of diamonds through the four C’s of identification (Carat Weight, Cut, Color, Clarity). One of the first companies to be built on IBM’s blockchain, the company remains in Beta; nonetheless, it has identified over 1 million diamonds to date.

Regardless of its inherent challenges, Canada is currently at the forefront of this development, poised to emerge as a leader if mainstream implementations occur. The Canadian government has been very open to technology adoption; the Minister of Finance has been exploring ways to integrate this technology within our existing banking infrastructure. From a regulatory perspective, the Financial Transactions and Reports Analysis Centre of Canada (FINTRAC) has been very interested in this technology, namely around the idea of an immutable record without the need of a third party. It is important for a sector to be ready on an industrial scale for the government to have an impactful role, an area that remains unchartered territory for blockchain applications.

Bringing the government to the table is a must, as most Blockchain solutions require some form of government intervention, and we see that the most interesting use cases are heavily regulated. This involvement helps our Canadian regulators build better policies as they explore evolving legislation. Bodies like FINTRAC have been engaging with the ecosystem and taking a more principles-based approach to setting policy, however, their concerns are restricted to their mandates (i.e currency / payment aspect for Fintrac) and not the broader concerns of blockchain technology. As such, it’s suggested that industry communicate collectively through one consistent message to all regulatory bodies in order to facilitate the opening of our regulatory environment to blockchain companies.

Although much progress and awareness has occurred in the last five year, the question remains when might the technology move from exploration to full infrastructure integration. One beachhead market begets other markets, so what industry does blockchain first enter, and how might this ripple across the financial sector? Only time will tell, but if you haven’t started hedging your bets on blockchain, you may find yourself quite quickly un-chained from the new kids on the block.